When I was in college, my favorite Joe King Carrasco song was Party, Party Weekend.  I’m not really sure what happened to him, but I thought about the song because Saturday we had two parties to go to.  One of them was a one year old birthday party.  It was one of the best one year old parties I’ve been to because they had live entertainment that was geared to the kids and the adults.  The family that had the party saw this singer at Pluckers in Round Rock one night and had such a great time with him there, they booked him for their baby’s first party.  I had so much fun listening to him sing the songs that made fun of some of the lesser colleges.  I wish I would have taped some of them to play for some of my loser Sooner friends.  I think he plays there on Thursday nights. I think we’ll have to make a special trip out there to see him again. 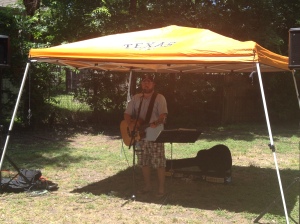 This guy was so much fun!

I’ve always loved going to parties with piñatas.  I think when I turn 50, I’m going to have a piñata at my birthday party. I was surprised because the kids left lots of candy on the ground.  You never would have seen that in my day!

Grilling up the dogs and burgers!

This cake was ALL over that beautiful little girl.

The second party was a graduation party.  I didn’t take any pictures at the party, so I can’t share any of them, but this was a great party too.  I kept asking the hosts if they wanted us to bring anything but they kept saying no. I told them that I was personally going to make something for the party and they laughed and said that they were glad they told me no.  Later tonight I’m going to try the recipe that I was planning on making.  If it is good, I’ll be making another post on here today to share. At the party they had a margarita recipe that was really good. All I know is that there was orange juice in the recipe, but I was told it was a secret recipe.  I’m going to have to make it my mission to find out that recipe!