I scream, you scream…

We all scream for ICE CREAM!!

My favorite dessert in the world is ice cream.  I really only like Vanilla Ice Cream though. My absolute favorite is to get Magic Shell and put it all over the vanilla ice cream. The chocolate forms a shell on the ice cream and it makes for a perfect dessert! It kind of reminds me of going to Dairy Queen when I was a little kid and getting a Dilly bar or a dipped ice cream cone!

When I was younger, a really big treat was to go to Steve’s Ice Cream in Highland Park in the Dallas area. They mixed home-made ice cream with different candies. My favorite was to mix Heath Bar in to my ice cream. It was really exciting when they opened in Casa Linda and we were able to go all the time and not just for a special occasion! Today, I can go to Amy’s Ice Cream in Austin for this same treat. Some of the workers at Amy’s will even do tricks while they make your mixed in ice cream. Now that I’m older, I’m always trying to watch what I eat so I try not to eat too much ice cream. I’ve found that some of the yogurt shops have good mix in specials as a slightly healthier option. There is a really cool yogurt place in Casa Linda in Dallas called Monster Yogurt that has all kinds of mix ins that you can add in yourself. You pay for your yogurt by the weight of it. I’m sure they have some like that in Austin too.  I’ll have to be on the look out!!

Saturday I finally did the Climb for Air.  I figured it would take me a minute a flight of stairs.To my surprise, the 33 flights of stairs or 660 stairs, only took me 8:07.  But let me tell you, it was the hardest 8:07 of my life.  But the third flight I was panting and had to start walking. It was crazy.  I’m telling you, if I had any stairs near by, I’d start walking them.  That was the best/hardest exercise I’ve ever done!!!! What was even crazier was firemen from around the area went in and did it wearing full gear.  It took most of them about 5 minutes or less to climb to the top!  I was so proud of my entire team.  We did so good! I’m going to put this on my annual races, but next year I will try to train for it at least a little bit.  🙂

After the race, we went to Coal Vines on 2nd street.  Three of us shared a sausage bell pepper pizza.  I was a little leary of this because I usually only put cheese on my pizzas, but this was one of the best pizzas I’ve ever eaten!  I recommend this place to anyone.  It wasn’t crazy expensive either!! 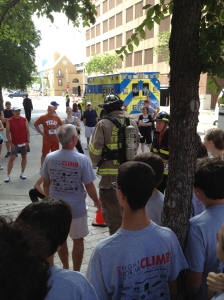 The fire fighters did the climb in full gear.

A fire fighter waiting to go in!

These guys are amazing! 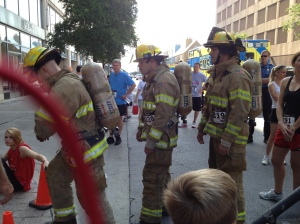 I think this was just another day for them! 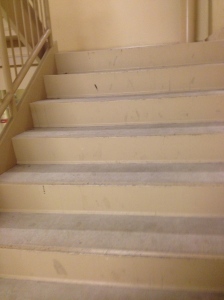 This is the stairs I had to climb.

I saw this car in the parking garage as I was about to leave.  It reminded me of being a kid. 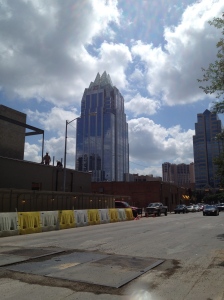 What a beautiful building! 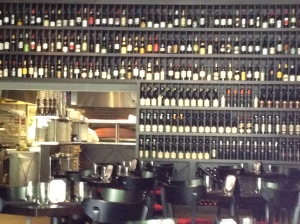 After the climb, we went to Coal Vines.  Their wine wall was too cool!

This is one of the best pizzas I’ve ever eaten!

Every once in a while, if we are in a hurry, we will go to the Taco Shack on Metric for breakfast. They make a pretty decent breakfast taco. I don’t really care for their hot sauce but that’s not a big deal for me anyway. Today I was annoyed though, because I was in the mood for some chips and queso for breakfast. They said they don’t serve that at breakfast time. So I asked for guacamole and chips since it was on the breakfast menu and the guy said they don’t do any chips for breakfast. What kind of Mexican food restaurant doesn’t have chips for breakfast!? I’m sure we will go back, but I won’t be getting chips then either. 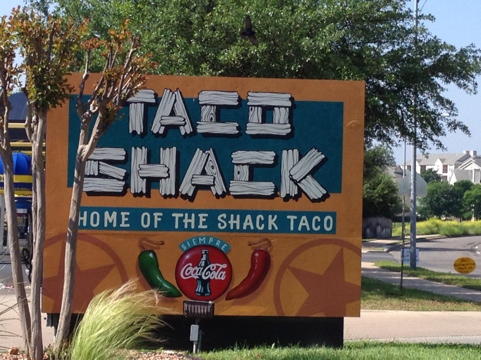 I haven’t posted anything on this blog in a really long time. I had pretty much forgotten about it until my father asked me if I had posted anything on here lately. Looking back, I focused a lot of attention on the places I had gone to eat once I moved to Austin. I haven’t stopped eating out, so I think I should resume writing about the spots where I eat! That’s where Torchy’s Tacos comes in.

Torchy’s is THE BEST taqueria I have found in Austin. I am totally addicted to their food. Their chips and queso is like crack to me. I could probably eat it every day! They mix a little guacamole in there and I have no idea what else, but it is YUMMY!! I also LOVE their baja shrimp tacos. I haven’t actually tried any of their other tacos, because once I found the baja shrimp tacos, I fell in love! My husband has pretty much tried all of their tacos and said he has yet to have one that isn’t good.

There are several locations, but my favorite is on South 1st street. Be prepared to wait in line and have trouble finding a seat if you go there. I don’t think I have been to any of their locations and slipped right in.

I love to go out to eat for breakfast. I enjoy getting up on a lazy weekend and eating out with family and friends. It sets the stage for the rest of the day. I have a few favorite places to go and places that I really don’t like to go. For me, breakfast basically revolves around the breakfast taco. If a restaurant has a breakfast taco, then I’m willing to try it. This weekend, we decided we needed to try something new. I googled breakfast places in Austin and about the only one we hadn’t tried was Star Seeds. I’ve heard about it, I’ve seen it, but I’d never been there.

Star Seeds is on I35 next to a Days Inn, which in my book isn’t a good sign; but I figured I’d suck it up and try it anyway. Thank goodness I did. Luckily for me, they have breakfast tacos. They are some of the best breakfast tacos I’ve had here in Austin. I don’t even know if you can call it a taco. It is a HUGE amount of fillings on a tortilla. I had to ask for another tortilla, to turn it into two tacos. Even then, I couldn’t even finish it. Good eats!

My husband was even more happy. He said this is his new favorite breakfast place. They actually have the good old fashioned breakfast with eggs, bacon and real hashbrowns. Most restaurants these days try to get fancy with their potatoes, but that’s not what my hubby wants. He wants real hashbrowns. Evidentally, they made them just the way he liked them!

The only thing missing at Star Seeds is a latte machine. I guess that would be too fancy for this small diner. That’s ok, I can easily stop somewhere else on the way home!

Tamale House No. 3 on Airport Blvd. was recently written up in the Austin American Statesman, so I thought I better go try it again! I haven’t been there in forever. According to the paper, they’ve been open for 30 years now! It’s quite fascinating to see the ladies at work behind the counter. They put together many combinations of breakfast deliciousness in split seconds. Breakfast tacos are only $.85 and well worth much more!

You better bring cash, as they don’t take credit cards. Also, be prepared to take it to go, because there aren’t many tables and if it’s cold out, you can forget it!

I have one word for Pluckers in Round Rock, LOUD! They have TV’s showing different sports, loud music, loud people in the bar…It’s an all around fun place to be on a cold, rainy Friday night. We went there on a Friday night and it was PACKED! We had to wait about 20 minutes or so to eat CHICKEN WINGS!! Can you believe that?

My husband wants me to write things about prices, parking, if I’ll be back, etc. I don’t ever look at the prices, so if you want to know the prices, you can always go to the home pages of the restaurants. I’m not advertising for the places I write about, just telling you about where I’ve been. If they want to advertise more on my page, they can conact me through email. lol! Parking was pretty good at Pluckers, but since it was so crowded, it was a little tight! I recommend Pluckers, so that means I’ll be back! Happy Mike?

If you ever find yourself in Manor, there is a great little restaurant there called Ramos. It’s right in the center of their booming little town. It’s pretty much the only restaurant in Manor. There are a couple of others, but Ramos is by far the most popular. From what I understand, the owner used to be the head chef at Chuy’s and decided to open his own restaurant. You can definitely taste a Chuy’s influence even if this story isn’t true. They start you out with chips and salsa, plus they add a jalapeno ranch type dressing that is just heavenly! We went for breakfast and I have to say that they had some of the best breakfast tacos I’ve had in a long time!