It looks like Manor finally got a coffee shop. I drove by yesterday on my way to UT. There was a lady with coffee out in front of the oil change place waving every one down. It reminded me of a lemonade stand. It’s too bad she is on the wrong side of 290 or I would have stopped. 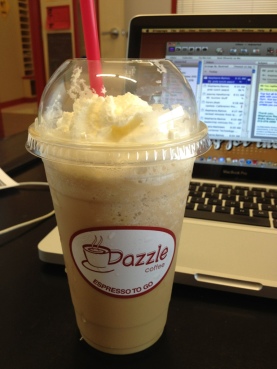 I am not a true coffee drinker.  I can pretty much only handle it if it is a caramel latte or something just as sweet.  There are no coffee shops where I live, so I only have coffee about once over the weekends. When I go, I go to Dazzle Coffee in Pflugerville.  Dazzle is my most favorite coffee place ever!!

Today, I was the alternate receiver for a coffee drink! My “super good looking, athletic” friend brought coffee for someone at work, but she wasn’t here, so guess who got her drink?!! MEEEEEE!!! He brought a caramel freezian with whipped cream!  It was amazing!! This is my lucky day!! 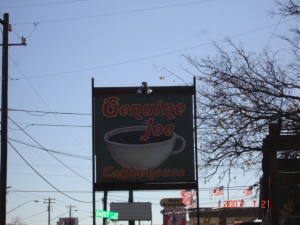 A sign on the old green house says that Genuine Joe’s Coffee on Anderson Street is the best coffee in North Austin. With a sign like that, you can’t help but want to find out! So, my husband and I made another stop on our never-ending quest to find the best coffee in Austin.

The barrista’s seemed a little clueless when we made our order. I was really concerned that not only would the coffee be terrible, but we may never see it or our food order. But, much to my surprise, we not only got the right order, but it quite possibly could be the best coffee in Austin. It definitely deserves my vote for the award for best coffee in North Austin at this point in our journey! (Of course, I haven’t had coffee from every coffeehouse in Austin, but I intend to try!)

I got a hot tip to try a coffee house called Flight Path, so I went online to find the location. Somehow when I mapquested it, I ended up on the opposite part of town. Luckily, my friend Natalia helped me navigate my way there! It’s located at 51st and Lamar, for those of you that would like to try it out!

I enjoyed my coffee drink, but my husband got some frozen coffee drink that was even better! He said he got the Carrollton, which is the Louisiana coffee cold. I’m not sure if that is correct, but MAN was it good! I kept sneaking sips out of his drink when he wasn’t looking. I’ll be getting that the next time I go there!

Natalia and I both got quiches, too. I’m not normally a big quiche fan, but I found these to be really good! I’m not sure what else they had in them, but they were definitely spinach and mushroom.

The barrista was also very friendly. He was interesting and funny. He admired my new scarf, so that helped seal the deal for me!

The Ruta Maya coffee house on S. Congress is a great place to get organic coffee. Especially if you have children. They not only specialize in coffee, they have lots of programs for children, such as yoga, puppet shows, a play area with books, toys and computers for kids!

It’s also a nice place for adults with their great concert series. Last night we happen to get there for a benefit concert. I was concerned when I walked in and saw the hundreds of little kids running around that I had gone to the wrong place for a date with my husband. I found out that the concert benefitted a music program for preschool children, which is probably why it was so packed with kids. Also, there was a second level where adults could go and sit without being disrupted by the children. (We chose to sit there!)

The first singer got up to sing and I kept recognizing a lot of the tunes and even some of the songs. He kept making mention that he had written the songs with this person and that. So, I began getting more and more curious about him. I came home and googled him and found that he is in the band Fastball. They sing one of my favorite songs, The Way. It was exciting to see someone of his caliber be the first person sing at a concert at a local coffee house! I hope I will get to see him again.

They also had a guy sitting in the shop with lots of pretty scarves. Being somewhat of a shop-a-holic, I had to go and check them out. He told me that the scarves were imported from Madagascar and that to purchase one gives a donation to Madagascar, (or something like that). The scarves were pure silk and they were really nice. That morning, I had just been thinking that I needed a scarf, so I bought one! He is going to send me some kind of tax form in the mail. So not only did I get something I liked, I did some good in the world too! 🙂

I also want to mention the coffee from Ruta Maya, since that is their primary job! 🙂 I got a Machiatto. Every so often, I have to try a Machiatto when I go to a coffee shop. When I was in Italy, I became so addicted to Machiattos that when I came home, I immediately went to a coffee shop to have one. I was depressed when none of them turned out to be the same type of drink. Well, that has all changed. I have finally found a Machiatto that closely compares! It’s not EXACTLY the same, but it’s close! I’m sure that the rest of their coffees are just as good! I definitely recommend this place for coffee and entertainment!

I went back to Halcyon, on 4th street, for a cup of coffee today. It’s a lot better than I had originally remembered it. It’s on the corner of one of those older warehouse style buildings and some of the walls are exposed brick. The other walls have artistic photography that you can buy, if you like that sort of thing.

I ordered a carmel latte, as usual. Pretty much that is what I order at all coffee shops. This one was excellent. Not bitter and just the right amount of sweet. I also ordered a sausage, egg and cheese panini for breakfast. It was delicious!

They have free wireless internet, which is always a plus. My friend “Natalia” brought her laptop and we spent an inordinate amount of time pouring through the ridiculous websites that are out there. Plus, she brought pictures from her trip, where she ruined Xmas for her friend Buddy! LOL!

The worst part of Halcyon is the parking. I thought I had gotten lucky when I parked right out front. But it turned out to be an expensive parking space, as I was ticketed for going over the 15 minutes of allotted parking time! BOO!

I think that the Spider House is the weirdest coffee place we have been to yet. The Spider House is located very close to the UT campus off of Guadalupe. It is probably an old house with an AWESOME patio. Unfortunately, we were there in the morning and it was too cold for the patio. We decided to sit inside. This place is kind of grungy. I’d have to say it was my least place I’ve been so far. I was there with good company though, so overall it was a very enjoyable exerience!

I was kind of hungry so I asked if they had a breakfast menu. They said all they had was bagels. I’m not really a bagel fan, so I asked to get something on the lunch menu. No, it was too early for that. So anyway, I opted for the bagel. It really wasn’t bad, just not what I wanted.

Their coffee cups are a little smaller than the rest of the places I’ve been. I may go back here for a beer, but probably won’t waste my time there again for coffee.

A couple of weeks ago we tried another new coffee house. We went to a place on Manor Rd. called Clementines. It is a quirky little place with random furniture and artwork. I think it must have been a house that they converted into a business. The coffee was ok, but the people watching made it all worthwhile.

When we got there we saw a guy with a blue shirt, blue jeans and baseball cap. I swear it was Lance Armstrong. Do you think he would come to a seedy neighborhood like this? It turns out that he was running the marathon that day, so it definitely wasn’t him!

Then we saw a strange guy on a weird bike. I don’t even know how to explain him so I won’t even try.

Last and best of all, we watched an older gentleman pull himself onto a U.S. Mailbox. He didn’t make it up on the first try. He makes it on the second try after making some interesting straining faces. I reached for my camera, but just as I get it out, he jumped down as his wife/friend walks up and they went into the coffee shop.

I think I will probably return to this amusing little place.

I moved to Austin a little under a year ago. So far, it has been an interesting journey. I plan to use this blog to talk about my likes and dislikes.

Being new to Austin, I want to find the best coffee house in the area. Everyone goes to Starbucks…Where is the sport in going there? Austin has lots of fun quirky places to go and have coffee. Even so, I still feel a need to go to Starbucks on occasion.

I started out going to Austin Java on Barton Springs. They have pretty good coffee, just not anything special. They got the Best Of from the Austin Chronicle. The last time I was there, I was on the porch and a mouse was coming out of the fireplace. When the waiter came by, I showed him the mouse and his response was, “Awesome!” I’ll give him the fact that we were on a porch, but it was covered!

I made my way to Joe’s on Congress. While there are other Joe’s, the one on Congress is the most fun because of the interesting people. I had a Turbo coffee drink. It was very sweet, just the way I like my coffee. Joe’s is different because it is more of a coffee stand than a coffee house. It is great to get a coffee and then hang out on the street. Plus, you can bring your dog. From what I’ve seen there is always a line and always busy!

I’ve also gone to Halcyon. I’m not sure I even spelled that right. It’s a quirky place down in the warehouse district. It’s pretty good and a fun place to hang out. Their couches are pretty ratty. There wasn’t as many people there, but it was just as good as any of the other places.

I’ll keep trying new coffee places and update the blog on other things I enjoy!