I am not a very good runner, but I kind of enjoy it.  I’ve successfully completed Couch to 5K…several times.  I usually quit running right after I get to 5K.  This happens EVERY time I start running.  My friend and I signed up for the Dallas Half Marathon, but about 3 weeks before the marathon, I quit running on a regular basis.  I finished the Half Marathon, but it wasn’t pretty. By the 11th mile, I couldn’t even alternate running and walking and had to walk the last two miles.  That’s ok. I still finished and I still got a medal.  Of course I said I’d never do another one, but within 3 days, I was already planning to try again.  This time I’m going to be in better shape!!

My friend found this work out on pinterest.  I’m not sure where it originated, but since she did it, I had to, too!! I didn’t think I’d make it through the first time, but I did it!!  Now I’ve done it twice!! I’m so proud!! I am hoping mixing it up like this will help me with my training for the Cowtown Half Marathon!!  Maybe this will be the year that I actually lose some weight, too!! 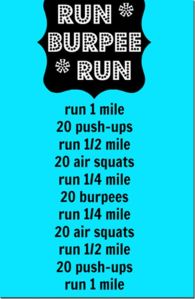 Who KILLED their run today!!??

ME!! That’s who!! I only have 2 more weeks of Couch 2 5K left and I should be able to run a 5K straight. Today I ran 25 minutes straight. Unfortunately, the GPS on Endomondo wasn’t working right, so I estimate that I ran about 2.5 miles straight!! I found out that they also have a couch to 10K and a couch to 21K app, but I think I’ll be happy if I can just run a 5K. I love running on the Katie Trail because it’s basically a flat run. Wednesday, I’m running in an 8K run at White Rock Lake/Flagpole Hill. My plan is to run 3 miles straight, then walk/run the final part. My extremely athletic friend said he was glad I was going to run more because that meant he didn’t have to wait as long at the end of the race for me. Punk.

Had it not been for Mark Cuban, owner of the Dallas Mavericks, the annual Dallas, TX. St. Patty’s Day Parade may not have happened this year.  This parade is probably the only cool thing that Dallas does. Austin has a festival/party almost every weekend, but Dallas really doesn’t seem to want to have cool things.  Well, luckily for Dallas, Mark Cuban came to the rescue and helped fund the parade.

I started out the day doing the Dash Down Greenville.  This year I made it about 2.5 miles before I decided I needed to alternate running and walking.  It took me 37 minutes to do the run.  It took Mike 31 minutes and I think Paul did it in 25 minutes.  After the run, they gave away free beer and other swag items that I didn’t really worry to much about. 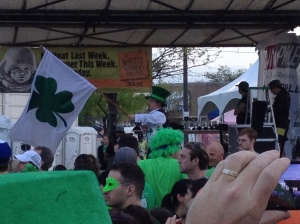 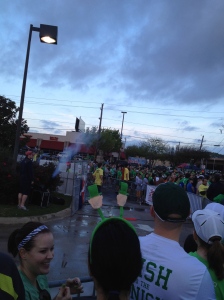 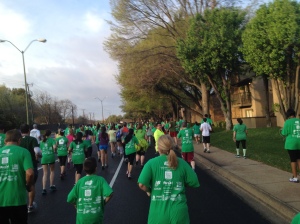 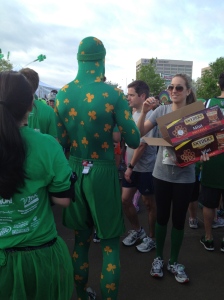 After we went to the car to change for the parade, we tried to go to the Schlotzsky’s on Greenville, but despite the fact that they door said they opened at 10:30 and there were workers inside, they told us they wouldn’t be open until 2:00.  They must not enjoy making money to be closed on one of the busiest day Greenville Avenue has.  I also think they should have considered putting a sign on the door, but I guess it’s none of my business how they run theirs.

The parade was a blast as usual. We stood at our annual spot and cheered on the “floats” and screamed to get free beads. Every year I think that our group should enter our own float since I haven’t ridden on a float and given the princess wave since college. We only have to find someone who wants to build and store the float somewhere.  Any takers? 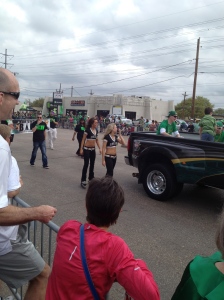 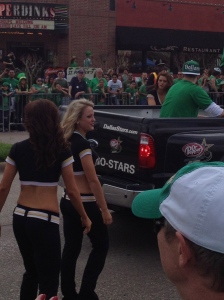 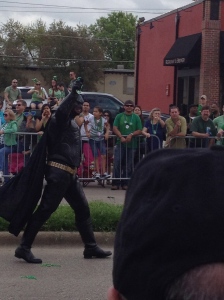 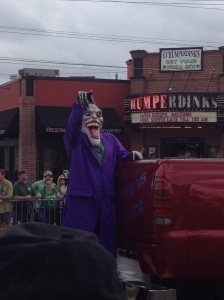 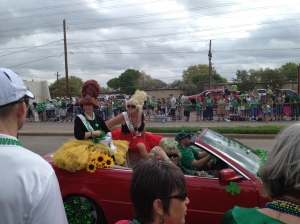 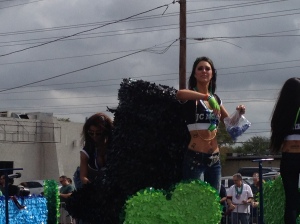 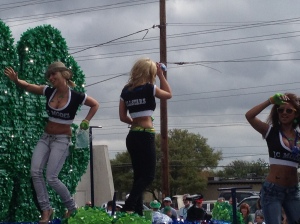 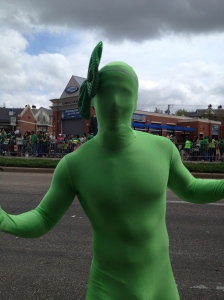